It is only since starting to read JUNO magazine that I have begun reflecting on my own birth experience. I soon came to realise that even after six years I had not fully accepted what had happened to me. I am hoping that writing this article will help me to look back at the birth of my child with fondness rather than upset and distress.

In 2010–11 nearly a quarter of all births in the UK were carried out by caesarean section.1 Amongst all these mothers I am sure that I am not alone in feeling a sense of disappointment and grief for the natural birth I had hoped and planned for.

When I found out I was pregnant I was overjoyed. I wrote a detailed plan outlining a birth with little or no intervention from medics or midwives, a water birth if possible. However, at 37 weeks I felt concerned about my baby’s movements and had a strong sense that something was wrong. The local maternity hospital advised me to come in and be checked and I was shocked when the midwife told me my baby was breech. This was confirmed by an ultrasound scan. My plans for a natural birth were turned upside down and I ended up having a planned caesarean at 39 weeks. Although my caesarean was planned I did not give much thought about what was going to happen or whether I would be able to have any control over the way things were done.

I believe my experience of caesarean section was pretty standard. I arrived at the hospital at 7am after having nothing to eat or drink for six hours. I then suffered an anxious wait before being walked down to theatre carrying a little outfit and nappy that my baby would soon wear. The theatre was as I expected: lots of equipment, noisy and bustling. The main thing that struck me was the number of staff. I was unsure of who they all were and what role they would play in the birth of my child. When I entered the theatre I felt fear, but also excitement that soon I would meet my baby for the first time.

After having a spinal anaesthetic I was laid down and drapes were put across my chest so that I could not see what was happening. The surgical procedure went smoothly but nothing stood out to make the experience magical and unique like every birth should be. In what seemed a very short time indeed my son was born, held up for me to see, then immediately taken away. There were a lot of wires, and the drapes seemed so close to my face that I was very reliant on the staff to assist and guide me – I felt quite helpless whilst in theatre. In a recovery room, about 40 minutes after delivery, I was settled into a bed and helped with breastfeeding. My hospital stay was short and I was home within three days.

The positive aspects of my experience were that I had a healthy baby boy, the staff were kind and competent, and the surgery went smoothly thanks to the skill and expertise of the surgeons and anaesthetists. My husband was able to be with me while I had the caesarean; this was a great support and is the only time a partner/husband would ever be allowed in theatre during a surgical procedure. This is a clear indication that advances have been made to enhance the caesarean experience for mothers. Being able to have my own CD playing during surgery was lovely and was actively encouraged. It was a compilation of carefully handpicked songs that I had made for my labour, and it was the only part of my planned natural delivery that came to fruition. My baby was born to ‘Echo Beach’ (Martha and the Muffins), and I will always love that song!

However, when comparing my experience of caesarean birth to that of mothers who have had a natural (vaginal) delivery, I feel that there are some changes that could enhance the process. Obviously a caesarean section will never be a natural way to give birth, but can improvements be made so that certain elements of a very medicalised and interventional birth feel more natural?

Certainly the thing I found hardest was not holding my baby immediately after he was born. I have an amazing photograph of his first few moments after delivery and I remember right then wanting to reach out and hold him to me. I feel that there is a significant delay before mothers having a caesarean are able to hold their babies for the first time. This is because it is not usual procedure to deliver directly onto the mother, but I believe that this should happen whenever possible. It would have greatly improved the experience for me.

If a baby is taken away to be checked and aided with breathing, he or she should be returned as soon as possible, but undressed/unswaddled so that there can be skin-to-skin contact. Much research has been done on the importance of early skin-to-skin contact in relation to success and maintenance of breastfeeding as well as reducing infant crying and improving maternal affection.2 My very first contact with my baby was when he was presented beautifully wrapped and tagged. I do not believe that this is routine practice for mothers who have a natural delivery.

Following a natural birth, midwives actively encourage and help first-time mothers with breastfeeding. This is done very quickly after delivery and is very different for those who have a caesarean, often waiting until the mother is in the recovery room, which can be up to an hour later. My baby cried almost all the time until he was with me in the recovery room, and probably suckling/feeding was the comfort he craved. If I had discussed this ahead of time then I could have been helped with feeding whilst in theatre, despite difficulty with positioning.

During a natural delivery all focus in the room is in on the mother and the imminent delivery of her baby. In theatre this feels quite different: the focus is on the surgical procedure and each specific staff member fulfilling his or her allotted role. A quieter, light-dimmed theatre with fewer people around might help to make the surgery feel more special and different from any other routine operation. It is perfectly in order to ask for student midwives/doctors/theatre staff not to be present and I am sure staff would be accepting of this. It might also be nice to know, prior to starting any procedures, who everyone in theatre is and what role they have.

I was interested to hear about friends who had had a natural delivery being able to see the placenta and umbilical cord and have the chance for this to be explained to them by their midwife. In theatre the midwife hurriedly discards it all into a clinical waste bag after examination. I would have liked the opportunity to see the amazing organ that kept my baby alive for nine months. I think this could easily be possible as there is plenty of time between delivery and going to the recovery room.

I am very aware that I was lucky enough to have a planned rather than emergency caesarean and that my baby was well on delivery. I think the points discussed above would not always be possible in all circumstances and it may be that some things have changed since I had my babies six and three years ago. Midwives always aim to make every caesarean the best experience they can for each mother. However, theatre routines and entrenched methods and procedures influence the way things are done. I think it is important for all expectant mothers to consider the possibility of having a caesarean section when writing their birthing plans. With this in mind they can incorporate their own ideas for a caesarean birth and discuss them with the midwives/surgeons ahead of time. This is key if you want to have some control over what happens during and immediately after the delivery of your baby and for your birth experience to feel more individual.

Some work has been published discussing natural caesarean birth. This goes much further as regards even the surgical procedures and makes interesting reading:

Jennifer Inglis is mum to Joseph, aged 6, and Olivia, aged 3, and is a part-time diabetes research nurse. (Accurate at the time this issue went to print.) 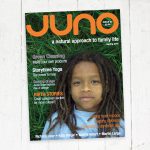 The Calendar of Life by Kirsten Millinson
Next Post: Reducing single-use plastic – reviews