Jenny Patel explains how she learned to relax and allow her children to follow their interests, observing how much they learn from each project

We home educate our three children, and over the years they have become extremely enthusiastic about particular subjects. We’re not talking science or English in their typical schooled form, but Transformers, movie-making or whatever their latest interest is. These temporary crazes often involve scouring second-hand shops or car boot sales for related items, and lots of creativity with cardboard boxes and random junk, along with a huge amount of industrious research in order to succeed in their mission. Films, books or shared ideas with friends often instigate the latest ‘fad’, which will then evolve into a full-scale project and subsequently occupy them for days or weeks at a time.

In the early days of home educating I used to feel frustrated when the children gathered a wealth of ‘stuff’ and the house seemed to be taken over by their current interest, knowing full well that they would soon move over to something else. In time, I came to realise that these temporary obsessions were actually hugely instrumental in their learning. A good example is the secret spy club they named MI17. This involved important-looking salvaged suitcases containing essential spy equipment, coded letters, information sheets and admission forms the children had produced themselves. Meets were organised and local news discussed such as a local burglary in the village, a missing cat and any suspicious persons. I guess you could liken the spy club to a school project. The children did research online looking at spies and gadgets. They used their IT skills to produce documents, and their organisational skills to set dates and let members know about future meetings.

Over the years the children have become engrossed with a wide variety of fads and have learnt or developed more skills with each one. They learned to tie-dye and sew (both by hand and using a machine) when they were on a fashion design fad, creating clothes for dolls and stuffed toys. Following a short movie-making course, the house, garden and surrounding area set the scene for lots of fun making costumes, props and makeup, drawing storyboards and of course practising drama skills.

At such times there is usually very little input from me. I am available for advice or guidance when asked, but otherwise I give the children the space to explore their latest interest. Children have such great imaginations, and to intrude into their world when they are so connected, switched on and engrossed would only be an interference in their project.

I have not always been so relaxed in letting my children take the lead and allowing these fads to take up so much time. When we first began our home-education journey, they would moan and loathe any set work, and I felt that forcing learning was futile, as they switched off and consequently learned nothing at all! By relaxing and allowing them the freedom to become enthusiastic about the current fad, I have seen them produce far more work than I could ever have imagined. We are not alone in this. A friend revealed to me that her son had learnt how to count and write numbers during a temporary obsession with football cards. He had struggled with numeracy at the mainstream primary school he was attending, but the lure of his football card collection made number recognition far more interesting and fun.

Play and fads can encompass all academic subjects learnt at school, but as the children are the directors of their projects, fully absorbed and enthusiastic, they are unaware that they are learning and thus feel no judgement or pressure. I can remember vividly the boredom of certain lessons at school, when I would drift into another world whilst staring out of the window and suddenly realise I had no recollection whatsoever of what the teacher had been talking about for the last hour. IT always seemed such a dull subject – hence my computer skills are to this day extremely limited. If only I could have learnt programming skills with the aid of Lego Mindstorms, or how to create moving models born from my imagination as my son has done, or produced newspaper articles using different applications with pictures – another skill the children learned during their press office phase. My daughter had struggled with writing when presented with a workbook, and she certainly didn’t seem to be able to remember how to spell. However, throughout the duration of collecting dolls she has written baby care books with great enthusiasm and learnt far more words than she ever did from that boring old English book! I think the hardest task for us as schooled parents is to entrust our children’s education to incorporate a large portion of play activities and fads.

“I’m sure it’s just a phase,” I say apologetically to my aunt, who lives next door, as she peers out of her kitchen window towards our driveway. Our garage door is open and the garage has become the stage for ‘Skull Music’, complete with electric guitar and amp, a multitude of upturned buckets and paint pots for drums, and a cardboard cut-out guitar, all accompanied by enthusiastic musicians. Budding singers with their broom handle microphones sing loudly, competing with the instrumental accompaniment. They have written songs, lots of songs, and require regular practice. “It’s just a passing fad,” I remind myself as I reach for a pair of ear defenders and seek refuge at the bottom of the garden.

Jenny Patel is a home-educating mum of three living in rural Northamptonshire. Striving to be self-sufficient, she is a keen forager and also enjoys helping at a local junk food cafe. When prised from the veggie growing project and polished up, she can occasionally be seen performing belly dancing at local events. (Accurate at the time this issue went to print) 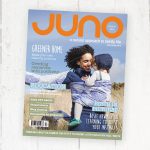 Why we need to talk to our children about climate change
Next Post: Snow and Ice Activities