Hay fever is an allergic reaction to airborne pollens. The name ‘hay fever’ is misleading: symptoms don’t just occur in the autumn when hay is gathered, and never include fever. Similar to those of a heavy cold, symptoms include stuffy and/or runny nose, sneezing, and watery, itchy eyes. People can react to early tree blossoms, or get hay fever later in the year from rape or grasses.

Q: Is it possible to get rid of hay fever?

If hay fever is addressed homeopathically during the winter months, it will lessen in severity each spring and possibly resolve altogether.

Q: But what about now?

No need to suffer during the hay fever season. One or more of the following can make a difference:

For an acute situation, especially if you can’t get to see your homeopath, one of the following homeopathic remedies (available from homeopathic pharmacies) may help:

Allium cepa*: similar irritation experienced to when peeling onions; burning sensations in nose and eyes; watery discharge; eyes red, irritated and sensitive to light. The nose can become red and sore from burning, corrosive mucus. Violent sneezing, croakiness and a hacking cough may be present.

Arsenicum album: affects the right side more than the left, with blocked nose alternating with watery discharge and frequent sneezing; potential eye inflammation with burning and swelling, relieved by a warm eye wash/compress; worse at night, especially for lying down, outdoors and cold; better for indoors and warmth.

Arundo: burning and itching of roof of mouth and nostrils, accompanied by pain at root of nose; clear mucus that can turn green with lots of sneezing.

Wyethia: unbearable itching on roof of mouth, ears, throat and root of nose; irritable, dry cough. Everything feels dry and irritated, but nose may still be runny. 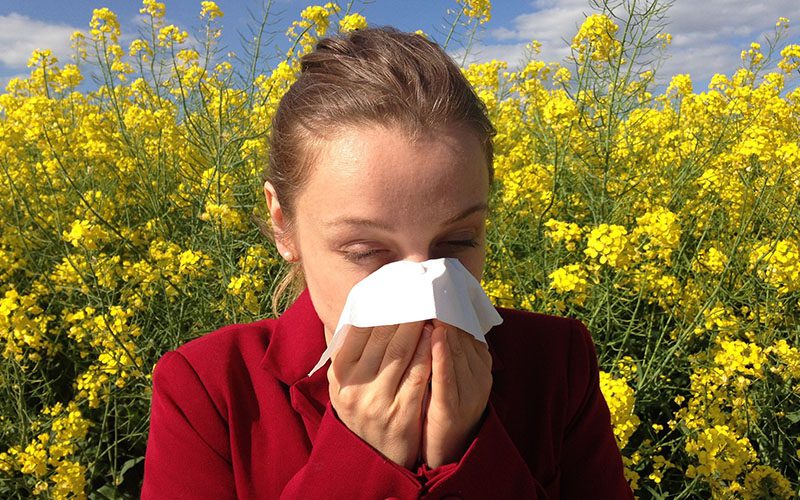 Q: How do I take homeopathic remedies for maximum effect?

The normal homeopathic remedy potency (strength) you will find in health food shops is 30C, which will work in most cases. For acute situations, allow one grain of the appropriate remedy to dissolve on the tongue away from food and drink, every half hour, for 6–8 doses or until the symptoms subside sufficiently (so you might find you need fewer than 6 doses or maybe 9–10). Only repeat one dose on the tongue if symptoms return. If after 8–10 half-hourly doses no sufficient relief has been obtained, seek advice from your homeopath or homeopathic pharmacy for a more tailor-made approach.*

* Some homeopathic remedies can have a broader action and can be taken without an accurate symptom match:

Allium cepa, Euphrasia and Sabadilla can be combined (from a homeopathic pharmacy) as a standby for symptomatic relief.

Mixed Pollens and Grasses is a combination made of pollens from plants, trees and various grasses; it can be used on its own, alongside another hay fever combination, or with any other indicated remedy.

Homeopathic Schuessler Tissue Salts Combination H for allergic conditions is another ‘general specific’; it is advised to start treatment six weeks before the expected onset of symptoms and continue during the season.

Elle Fox is a homeopath and CNM-trained naturopath. CNM (College of Naturopathic Medicine) offers training in a range of natural health therapies in class and online. www.naturopathy-uk.com

Reviews of eco-friendly products for the home
Next Post: Kim McCabe helps us support teen girls to be who they want to be