For a long time people simply followed the mainstream way of parenting, depending on what the norm was at the time. There are now many different ways to parent, with no one prescribed approach, and much more of an understanding that different children benefit from different approaches. Although these different parenting types are subject to a lot of criticism in the press, I think it’s a good thing that we can pick and choose to meet the needs of ourselves as parents and our children. However, there is also immense pressure to parent in a certain way, and this applies to alternative methods too, such as attachment parenting and home education.

In my interview with George Marshall (published in JUNO Issue 53) I touched upon the notion of guilt and how it can be a barrier to making positive lifestyle changes. I can’t count the number of times I’ve reassured other people that they aren’t awful parents for using buggies instead of slings, or because they couldn’t baby-led wean their children, and so on. Thanks to a stream of press on population growth* (generally under the less PC term of ‘overpopulation’), parents are now even feeling guilty for doing what all animals have done since the beginning of time! They feel guilt for having babies, for bringing children into a world with a changing climate, and for not being able to live up to the standards of their chosen parenting style. They question whether they can call themselves green parents, while their children are running around in muddy fields, watching butterflies and developing green fingers. Whoever said that you had to have a carbon footprint of zero in order to be green? Being alive means that you have an impact on the planet. For me, being green means doing as much as you’re able to do to make that a positive impact – which is all anyone can do – to reduce your carbon footprint, whether you are vegan or take part in Meat Free Monday, whether you participate in litter picks and avoid plastic or recycle everything you can, whether you have children or not.

Green parenting, like any type of parenting, is a loose term that begins with your intentions. There are no tick boxes in parenting: it’s messy and an ongoing changing process. The same goes for attachment parenting: there are no ‘standards’ to live up to, but myriad approaches we get to choose between. In my book I cover as many different approaches to parenting decisions as possible, outlining the available science behind them. So, yes, there is evidence that holding your baby close in a sling is good for him or her, but this closeness doesn’t have to be through babywearing. Many women simply can’t babywear, either because they have back or pelvic issues, or for other reasons. Meanwhile, having your baby in a parent-facing pram has also been found to facilitate a better bond, so who’s to say that buggies are bad alternatives? The same goes for virtually every parenting issue. Couldn’t breastfeed? Couldn’t co-sleep? Bond in other ways. Didn’t get much skin-to-skin contact in the beginning? Make up for it now. That’s the beauty of parenting: it’s an ongoing process for as long as we are parents, but, especially while children are young, mistakes can be remedied. For example, children’s microbes are constantly developing, so babies who weren’t breastfed or born by natural birth can still pick up the microbes they missed out on, through skin contact, playing on farms and outdoors, and eating a varied diet. Baby won’t eat many varied foods? Don’t sweat it: all children go through food phases and you’ll all come through the other side all right. Growing, developing brains work in the same way as microbes too, and I think children are more resilient than we give them credit for.

So may I suggest a new, radical approach to parenting? It may be taboo, but here it is: guilt-free parenting. Let’s start at the beginning: none of us are perfect, but we love our children and we make constant sacrifices and compromises for them. We give them everything they need when we can – and when we can’t, we need to learn to let that go. All that holding onto guilt does is hurt ourselves, by adding to our anxieties (which are sky-high in parents) and depressions. Our children are loved, and they know they are loved, so they are going to be fine. Can we start applying this to ourselves as parents too?

*A note on population: science tells us that birth rates go down to sustainable (or lower than sustainable) rates when women have access to education and birth control. For more on this issue I recommend watching the late statistician Hans Rosling’s TED talk on global population, which demonstrates succinctly that lifting people out of poverty leads them to have far fewer children.

Zion Lights is JUNO Contributing Editor and author of The Ultimate Guide to Green Parenting, and is currently studying for an MSc. She blogs at Science Mum: From the Soil to the Stars.
www.zionlights.co.uk @ziontree 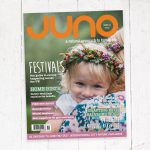 Why Choose Organic Cotton?
Next Post: Festivals feature: Families tell us what they love about festivals around the UK