I first heard of George Marshall through a reading recommendation from a friend. She knew I was interested in the silence around climate change, and that I was studying for a Masters in Science Communication, so she recommended his book Don’t Even Think About It: Why Our Brains Are Wired to Ignore Climate Change. This work explores many of the issues around climate silence, including environmental campaigning, the language used by both sides, and why climate change is such a difficult threat for so many of us to process, and it makes the point that accepting the science is not straightforward.

I later met George after a speaking engagement at an environment-themed conference, and I was deeply impressed by his focus on building bridges and connection, so I decided to catch up with what he’s been doing since then. First he reiterated what he had said in his book – that the environmental movement is “horribly horribly polarised”, with too much blame and finger-pointing and not enough listening and communication on both sides. George works with many organisations to help bridge these divides through his organisation Climate Outreach, where he delves “deep into the heart of the communicators” to help reshape the way they communicate.

The key issues are related to behaviour, language use and making connections. George works with some difficult groups, for example engaging conservative values, faith groups and their leaders, and he is often shot down by people who want to maintain the polarisation. If you voted Remain, would you want to sit down and have tea with a Brexiteer? This is, in essence, the work that George does. He describes telling environmental organisations to stop blaming “the other side” for all our problems, to respect the “hard and dirty dangerous work of people in the industry” and all that it has done for us, and likewise he has taken photos of people at oil plant blockades and held it up to the heads of the oil industry. “It’s really won by people talking to each other,” he tells me. “Listening is very important.” It makes complete sense, yet this approach is unusual, and it also sounds difficult to do.

In Don’t Even Think About It, George talks about how the polar bear narrative holds back environmental progress to some degree, because it is an image that doesn’t speak to enough people, yet is also the image that has become representative of the climate fight. “Polar bears became the climate change branding,” he tells me. Yet climate change is about so much more than losing this animal that many of us have never seen – and never will see – in real life. Climate change threatens communities, our homes, our health, families, food security, and so much more. I ask George whether people are now getting the message about changing the imagery, as recently a French publisher translated his work and put a polar bear on the front cover. “We think in terms of icons and stories,” so George’s work involves helping people to redefine climate images, using for example new forms of energy like solar panels and electric cars, or local images that people care about, such as an iconic tree, as landscape is “very very strong in the British identity”.

George describes the work a larger-scale organisation, The Climate Coalition, has been doing in testing different language – the ‘Show the Love’ campaign has been successful in redefining ideas around climate change and has now been adopted by Al Gore’s Climate Reality project. “It works because it’s grounded in love and positive validation,” George tells me, “which is actually a very conservative approach.”

What message does George have for environmentalists who feel burdened by climate change? “You’re great. The environmental movement has done a lot. But we made a mistake thinking we could win this on our own.” George brings up the quote about a small group of people changing the world, which is often incorrectly attributed to Margaret Mead. “It is not a small group of people,” he says. “For real change to occur, we need a large group of diverse people. The reality of change has always involved different identities and tactics. We need to work together.” Environmental organisations recognise this when it comes to big business, but grassroots groups don’t tend to, and that’s what has to change. When more conservatives join the fray, we will start seeing more changes made to tackle climate change. “More people of the same type only leads to further polarisation,” George tells me. For example, the mass march against climate change in New York was led by Bill McKibben “and expressed only a liberal identity. A radical protest would not have had Indigenous leaders, but a Texan Republication leading it.” As a long-term environmental campaigner myself, I feel myself balk at his words, but after 20 years of talking about and campaigning against climate change I also know that he is right.

It’s refreshing to hear George speak so openly about these issues, and he identifies one reason why this is the case: “Silence around climate change is as important as silence around sexual abuse. It’s different of course, but the overall importance is constructed silence – people who feel there is no space to talk about it.” To change this, George says, the single biggest thing anyone can do is “talk about it more with people around you.” He recommends a video he put on YouTube of how to talk people with different views, in this case a climate change denier.

Sir David Attenborough recently made a video denouncing ‘overpopulation’, and I’ve seen many parents take this as a personal jab at them. I ask George what parents can do. “I’m really proud of my children,” he says, and, “We need children” – by having no more than two we are simply replacing ourselves and preventing an ageing population. As people increasingly live longer, who will care for them if we aren’t replacing ourselves? More generally, George tells me that people must “hold what you have as important to you, have pride in what you do. The worried guilty mindset really doesn’t build bridges. It doesn’t empower or add to who you are. Have a happy and positive image and pride in who you are.” The reward, he tells me, is that you get to be who you are. Only then can we work together to face the reality of climate change.

Zion Lights is Contributing Editor of JUNO, and author of The Ultimate Guide to Green Parenting. www.zionlights.co.uk 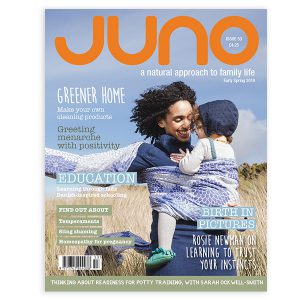