We have too many toys in our house. This might sound a bit melodramatic, but it isn’t an easy admission to make as a ‘green’ mother of three.

We started out with such good intentions. We were determined our children would have a childhood full of old-fashioned pleasures; of home-made toys and imaginary worlds, of dens made from bed sheets, and tea parties under the table. Their toys would come from the world around us, gathered by the children themselves. Their dressing-up box would be filled with old curtains, squares of silk and foil crowns, and we would build castles out of cardboard boxes. We would buy second-hand, share with friends, make do and mend. We would not plunder the Earth’s resources buying cheap toxic toys, shipped halfway across the world, produced by people paid a pittance. We would not buy dolls that promoted unrealistic body images and taught my daughters that they must have big breasts, tiny waists and painted faces in order to be beautiful. We would not be seduced by sophisticated advertisements, or pander to current crazes. We would not join the race to ‘fast-track’ our children with educational toys and DVDs. We would limit television watching and not let our children watch channels with adverts. And we would never let a video game into our house.

But I look around our home now, seven years later, to find that somewhere along the way, it seems to have turned into a haven for materialism. The evidence is everywhere. Mounds of toys hardly ever played with, Barbie dolls dressed in miniature teetering high-heels (and not much else), bits of broken plastic stuffed in a cupboard because I cannot bring myself to put them in landfill. And my own private nemesis, a small white games console, a gift from a well-meaning family member, half-hidden under the sofa, taunting me every time I enter the living room.

The clear line my husband and I drew before we were parents, about what we would and would not allow to enter our children’s play, has become a twisted, curling, loop-the-loop type of line, as we grapple with everyday dilemmas such as whether to decline party bags (usually filled with cheap plastic loot), or whether branded and plastic toys are okay for our children if they are bought second-hand. Birthdays and Christmases are complicated. Is it acceptable to tell relatives what you will and won’t accept as presents? How do you explain to a 4-year-old that face paints are fine, but the miniature box of make-up, complete with instructions on how to make yourself pretty, is not something you want her to play with?

The more we have tied ourselves in knots trying to answer these questions, the more we have lost sight of why we made the decisions in the first place. One electronic toy, we tell ourselves, is not going to turn our child’s brain to mush or kill his imagination; nor is it worth sounding preachy and ungrateful and starting a family rift for the sake of an age-inappropriate birthday present from a relative. But the trouble is, a compromise here, and an ‘oh-I-suppose-just-this-once-won’t-hurt’ there, and before you know it your home can resemble a games arcade.

The 2011 UNICEF report on children’s wellbeing, inequality and materialism1 found that when asked what makes them happy, most children don’t mention material goods. The children interviewed for the study were very clear: a good day for them was time spent with the people they loved, taking part in creative or sporting activities, and being able to go outdoors and have fun. Not branded toys or expensive games consoles. So why have we parents felt the need to keep on acquiring new possessions for our children, even though we can surely see they are not needed or treasured?

I am tempted to blame advertisers. The other day my son pointed at a billboard and proudly announced: “That says Tesco!” Give him half a chance and he’ll have learnt the entire song from an advertisement. He doesn’t yet read and yet he can read brands. He soaks up the images they like to portray of smiling children playing with brightly coloured toys, happy because they have all the latest gadgets. “When can I get one of those?” he asks, without even knowing what the “one of those” is.

Advertisers are a powerful and poisonous influence in our children’s lives, and their relentless drive to turn our children into consumers at ever-younger ages is something we should be worried about, but it would be wrong of me to pass the buck completely. My husband and I are the ones who have allowed materialistic behaviour to creep into our lives. And we are the ones who, somewhere along the way, started to lose confidence that our children could really be happy without the latest gadgets and toys. Perhaps it was the fact that we too are the products of a consumer generation, sold on the idea that more stuff means more happiness, or perhaps we mistook our children’s natural and healthy boredom at times to mean that they needed more to play with? Either way, we started believing that our children wanted more, more, more, and that this was normal, when in fact we couldn’t have been further from the truth.

We often joke that children are usually happier with the cardboard box than they are with the fancy gift that came inside it, and yet we continue to buy the fancy gift as well, as if we couldn’t quite believe they would really be happy with such a simple toy. It is an easy trap to fall into when the encouragement to keep on spending is everywhere you look. How we teach our children – and ourselves – that more stuff does not equal more happiness is one of the great parenting challenges of our age. But as with most of the challenges my children bring me, I can usually find the answer by observing them. My eldest daughter asked the other day if, as a treat, I could tell her stories about when I was a girl. How blessed I felt that she was still able to see that sharing time and stories together was a gift far greater than anything that could be bought from the shops, and how wonderful that she could remind me just how much joy we could share without ever spending a penny.

So, taking my lead from her, I have decided it’s time to redraw the line. No more unnecessary toys, and no more staring at the games console wondering where it all went wrong. For now it’s going away until my children are much older, and in its place is going to be far more family time and more appreciation of what we already have.

Clare Cole is a writer and mother of three from Nottinghamshire. (Accurate at the time this issue went to print). 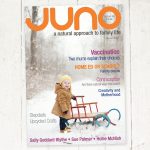 The Revolution in Manhood
Next Post: Shila Mistry from the College of Naturopathic Medicine looks at how nutrition can help with endometriosis