One of the clearest memories I have from my childhood relates to climate change. There was a television campaign run by a green activist organisation that seemed to air frequently: in any case I remember seeing it many times, and the tagline at the end: “It’s not too late.” The advert showed things like lights being switched off and sea levels rising, and as a bright child with a lot of empathy I wanted to learn more about the issue and do something about it. But I remember my older sister watching it with me one evening and saying at the end in a very cynical tone: ”It IS too late. They’re lying.” That hit me hard. I went from feeling concerned enough to act, but optimistic, to constantly worrying about global warming, which is what we called it at the time. Mostly this anxiety manifested in a fear of flooding, to the extent that I would feel panic whenever it rained heavily – ”Mum, what if it doesn’t stop?” – and started to refuse baths. I remember my mother laughing at me because she had no idea what was going on in my head, and I had no idea how to express it. I still did good things to try to improve the situation, like badgering my parents into using a recycling bin – this was well before kerbside collections and green bins existed – but beneath it all was a crushing, terrifying anxiety that I ended up carrying for many years.

That was in the early nineties. I’ve organised rallies and attended marches, been a long-term vegan, written a book on eco-parenting, never given in to the urge to learn to drive, refused to fly… I have done everything I’ve felt able to do, but over time my motivations became healthier, as my anxiety about climate change has dissipated. How did that happen? It makes no logical sense – the situation now is even worse than ever. But I now have two children, and when we talked about the warming planet it was as if I finally relived the awful experience I had as a child, and healed that old wound. When my children first learned about climate change and showed the same expressions of worry that I no doubt had as a 7-year-old myself, instead of making a cynical, frightening statement about it being too late to do anything about it I reassured them that it is not too late.

I’ve heard people say that climate change is too big an issue for children to comprehend: but actually it’s too big for any of us. That doesn’t mean that we should sweep it under the bed, or into the darkest corners of our minds, and allow it fester and grow. We must confront the thing that we have to deal with, and there is courage in doing so. The best thing we can do is talk about it, because so many of us are afraid to. It is an ongoing process involving understanding, questioning, grief, denial, fear, and many other emotions. We carry much guilt and disdain for what we have done to this planet, but those are not going to find us solutions. We have to accept the situation for what it is, and then look at what we can do to help make it better.

For my family, it’s about making small changes, doing our small bit, and realising how much power those small actions have when they extend to the majority. However, as we learn more about climate change – and as the recent IPCC report details – we really are running out of time, and I think it’s important to acknowledge this. I don’t want to use words like ‘irreversible’ and ‘catastrophic’, because the mainstream media is already throwing them around, and I don’t think fear is a good driver for change, but I do think we need to recognise that while our own small changes may make us feel good – and I’m all for doing anything that feels good, as that’s what life’s about, after all – they are not enough, and we may well be on our way to extinction. But this is a collective burden: it’s not on you or me, and it’s not even on that CEO or that big corporation. We made mistakes, we lacked foresight, and we have struggled to find solutions, but there is still work to be done.

I think we do our children a disservice when we don’t talk to them about this. We can’t keep focusing on the good that recycling and eating less meat do: we have to acknowledge that these things are simply not enough. We don’t need to give children all the details all at once, and we certainly don’t need to frame the topic as it being ‘too late’ for our species, but we owe it to them to prepare them in some way for what we are now facing. We need to have conversations about increasing heatwaves, flooding and drought, and migration of people being displaced by these weather extremes. Our children need to understand that they are living on a warming planet and that it wasn’t always this way. They are inheriting this big, almost incomprehensible issue, but we are all in it together. We need to own up to our part in this and accept the emotions we are feeling about it all – and then to let them pass, because they are only emotions and they do always pass, and we have work to get stuck into.

It’s not too late.

Zion Lights is JUNO Contributing Editor and author of The Ultimate Guide to Green Parenting, and is currently studying for an MSc.
www.zionlights.co.uk @ziontree 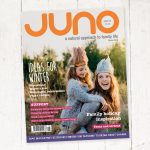