I have a confession: I used to think breastfeeding women were a bit weird. For years I simply couldn’t understand why women would choose to expose in a public place a part of their body usually kept under wraps, and create a whole world of awkward for the people around them. After all, don’t we have bottles for that sort of thing now?

Before you decide I’m a horrible human being, please let me explain how my views on breastfeeding were formed – and how I eventually managed to move past them.

I first encountered a woman breastfeeding when I was around 4 years old. A friend of my mum’s – let’s call her Sally – was at our house for a children’s party when she suddenly whipped up her top, produced a boob and began to feed her newborn. I remember being hurriedly ushered out of the room and not really offered an explanation as to what Sally was doing and why I wasn’t allowed to witness it. All I knew was that it must be something a bit rude and inappropriate for children. Which is pretty ironic, really.

When I hit my mid-teens in the dying days of the 1990s, I became acutely aware of society’s obsession with breasts as sex objects. During this period, the artist formerly known as Jordan was busy carving out a career for herself on Page 3 of The Sun, while lads’ mag FHM projected an image of Gail Porter’s boobs onto the side of the Houses of Parliament. The launch of Nuts and Zoo magazines was just around the corner. Breasts were everywhere. And the message was that they were there to be ogled at, created for the sexual pleasure of men.

As society dictated, my own breasts became sexual objects to the extent that the thought of using them for any other purpose seemed alien. By the time I met my husband-to-be a decade later, the Equality Act 2010 had been introduced, stating that it is sex discrimination to treat a woman less favourably because she is breastfeeding. The media carried stories about various nursing flashmobs that sprang up following unfavourable treatment of breastfeeding mothers in shops, cafés and restaurants. The NHS ‘Breast Is Best’ mantra was indelibly etched onto the minds of mothers across the UK. Yet I had no intention of breastfeeding any children we might have together. I simply could not get my head around the idea of repurposing my breasts.

Fast forward to 2017, and I was pregnant with the baby the doctors told me I might never be able to have. And this miracle pregnancy fundamentally changed my view on breastfeeding. I was finally having the baby I was so desperate for, and I wanted to do everything I could to give him or her the best possible start in life. And after I had dutifully read all the parenting books, paid attention at NCT classes and researched all the health benefits of breastfeeding, it finally clicked what a wonderful thing those nursing women had been doing – especially when they encountered prejudice against public breastfeeding.

But there was still this nagging doubt gnawing at the pit of my stomach.

Then it dawned on me: I was scared I would end up like Sally. I was frightened that if I breastfed in public, small children would be ushered away, I would make others feel uncomfortable, I would be called all sorts and made to feel ashamed.

I invested in a breastfeeding scarf, thinking this would be the answer. And for a time it was. It helped me get the confidence to feed my baby in public. Except that she hated it and often got tangled up. And this flimsy bit of fabric was near useless when it came to feeding on park benches and in seafront shelters when the tiniest hint of a breeze made the whole thing billow out like a windsock.

So I ditched the scarf. And it was liberating. I’ve fed my daughter in pubs, restaurants and museums, on planes, trains and ferries, and I have had an overwhelmingly positive experience. I have had one negative response, but so many people have been willing to offer support: the woman who bellowed at a packed train carriage asking someone to give up their seat when she could see I was struggling to feed standing up; the smiling man who so eagerly obliged.

I feel blessed that I am able to breastfeed my daughter with relative ease, and eternally grateful that I managed to smash the mental barrier that could have denied me one of the most beautiful and fulfilling experiences of my life. I am only sad that it took me so long to realise what an amazing thing it is to breastfeed, and that I didn’t appreciate what these mothers were doing for their children. When my daughter is a little older and we come across a ‘Sally’, I won’t steer her away. I’ll tell her exactly what a great thing ‘Sally’ is doing for her child, and let her know that I was proud and honoured to do the same for her.

Laura Cooke is a journalist and blogger living in south-east England. She gave birth to her miracle baby girl in August 2017. 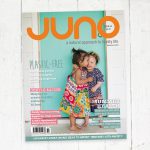