“Remember, as far as anyone knows, we are a nice, normal family.” It’s a well-known Homer Simpson quote, but what actually is a nice, normal family? In our opinion, our family is close enough. We walk our dog, we eat dinner together, we laugh, we travel, we argue, we explore, we grow. But to the outside onlooker, our family may seem a little different.

I’m our son’s Mummy, and my wife, Lauren, is his Mama. Most people are quite curious as to how two women came to be two mums to the same child, and in most cases it’s definitely more of a journey than most couples’ paths to parenthood!

Lauren and I met in the summer of 2004, aged 18 and 19. I had no thoughts then of having children. But Lauren did: motherhood was within her, waiting to be given its opportunity to blossom. Neither of us was looking for a serious relationship, but life obviously had a different idea!

Over the years we fell more and more in love. We moved in together in 2006 and married in 2013 (technically then a civil partnership). We spent a year after that enjoying the freedoms of being just two, but it was clear that we were fast becoming ready to welcome someone else into our nest, to share the love that was so abundant in our lives.

But how? After a lot of research, we narrowed down our options – in vitro fertilisation (IVF), intra-uterine insemination (IUI), or home insemination. As people who had always tried to live natural, ethical, eco-friendly lives, we wanted the creation of our child to be as organic as possible. So we looked into the most natural method, home insemination, after being put off by the quantity of drugs and injections required by IVF. Our GP was very little help, so we relied on the internet for our information. We managed to find other same-sex couples who had conceived and were willing to offer advice, and soon we felt ready. It is illegal to ship sperm to your home from a sperm bank in the UK, so we used an overseas bank, although this carries the risk of the sperm being confiscated at customs!

Choosing our donor was a strange experience. People jokingly asked if it’s just like online shopping, and in a way it is – though the importance of what we were making a decision about was immense. As Lauren was going to be carrying our baby, we used a sperm donor who had similar physical traits to me. We had a lot of information about the donor from the sperm bank, but we didn’t get too bogged down by details. We went for someone who was physically healthy and possessed the right traits, but a large deciding factor was the feeling of what kind of person the donor was. The sperm cost us around £800 – and seeing it arriving in a giant container of dry ice was bizarre!

We timed Lauren’s ovulation with ovulation tests, and we had two attempts. The insemination resulted in a chemical pregnancy that sadly went no further, and our next attempts at home insemination, using a different donor, also proved fruitless. We began to feel overwhelmed and out of our depth attempting the process solely by ourselves. We realised that not only was home insemination not giving us a baby, but also it wasn’t the peaceful, natural experience we had expected. The responsibility was proving very stressful, as well as the difficulty trying to pinpoint exact timings.

We decided that putting our treatment in the hands of medical professionals would give us the peaceful creation of a child that we so longed for, so we booked an appointment at a fertility clinic. Our treatment began with many tests, for both of us. We originally planned to use my eggs (a process called reciprocal IVF, where a woman receives fertility treatment using another woman’s eggs), but my tests showed a multitude of fertility issues that meant that using my eggs would put me at great risk and had almost no chance of being successful. This was difficult to deal with at first. It was unsettling to be told that I was incapable of even assisting in the creation of a life, but the feeling soon passed.

In simple terms, IVF involves stimulating a woman’s ovaries to produce eggs, which are then removed and fertilised, following which one or two are replaced. To get to that stage, we had to have many scans and blood tests – even after we established that I would have no biological part, I was still required to be proven healthy – and mandatory counselling to ensure that we understood what IVF entailed, how we felt about using a sperm donor, and how our families felt. I remember the counsellor saying how important it was to ensure that our families used correct terminology – that there was a donor, not a dad. As we were married, I would automatically be a legal parent to the child.

We also attended an appointment for me to learn how to give Lauren the multiple daily injections that would be required. Though we were both nervous at first, the injections became a happy ritual full of love and hope. Like everything that had made up the IVF process, it didn’t seem clinical or unnatural. These were all things we did with pleasure and enthusiasm, excited that every scan, injection, appointment was bringing us closer to our baby. We maintained a peaceful, calm outlook, knowing that the creation of our child was in good hands. Together we attended a wonderful acupuncturist: an hour spent in a candle-lit, incense-scented room, with Lauren receiving the treatment, sometimes in silence, sometimes talking with our acupuncturist about everything and anything – how we met, our pasts, our future, our hopes. Our sessions left us blissful and optimistic, and the acupuncturist gave us wonderful positive visualisation techniques to use.

After weeks of injections, counselling, legalities, and the anticipation-filled final scans, Lauren was ready for egg collection. It didn’t go quite to plan, and when I was taken into the room where she was recovering, she tearfully, groggily told me we only had four eggs. The doctor explained that she had ovulated early, and the surgeon had luckily, skilfully managed to save those. They also informed us that Lauren needed to recover due to having so much fluid in her ovaries, so instead of a straightforward fertilisation and transfer, our eggs would be fertilised and then frozen, and our transfer would happen a few months later.

I remember anxiously waiting for the call to tell us how many of our four eggs had survived. I knew 100% was unrealistic, so I constantly visualised the number three. I’d like to think it worked, as three of our eggs survived, with two going on to fertilise. The low number was a niggle in the back of our minds, but the peacefulness and optimism we had maintained gave us much comfort, and we strongly believed that our baby would be created when the time was right.

The day of the transfer was wonderful. We listened to music from our wedding and from road trips we had taken, and had a last visit to our wonderful acupuncturist. This time, as Lauren was not sedated like during the collection, I could go with her for the procedure. The medical staff were amazing: gentle and respectful, and they even gave us pictures of a scan of the moment the embryo was transferred, and a microscope shot of the embryo – we call it the earliest baby picture ever! Lauren and I watched the scan screen hand in hand, full of hope and happiness as the embryo was transferred, and it really felt like we had created this life together.

A week later, we were staying in a vintage caravan in the Welsh Black Mountains, when we got our wonderful positive pregnancy test result. It was a beautiful, surreal, emotion-filled moment! Despite a turbulent pregnancy – Lauren suffered from prolonged morning sickness, a bleed at six weeks so large that nurses assumed she had miscarried, and pre-eclampsia – she took it all in her stride, with strength and grace. She used yoga to bring calm to her body and mind, and we spent many evenings with our hands on the flickering kicks of life beneath her skin, in awe of the miracle that was growing.

Our beautiful son was born in June 2016, and he has changed our lives in the most wonderful ways. His birth created not only a baby, but also two mothers. And for the most part, people accept that. There have been occasional, unintentionally hurtful comments, such as a midwife asking Lauren if she’d like her sister (me) to leave the room during an examination; documents that only have a space titled ‘father’ for my details; one of Lauren’s elderly relatives referring to me as ‘Aunty Sarah’. At first these comments remained anxiously etched in neon letters in my mind, but quickly they faded as my love for my son grew. Since then I’ve had many people assume I am our son’s biological mother, but we realised increasingly how little biology matters. My son wasn’t made from my body, but from my heart, from the hearts of my wife and me. We have never had any negative comments about being a same-sex-parent family; in fact our parenting methods (cloth nappies, gentle parenting, co-sleeping, wooden toys, gender-neutral clothing) often raise far more questions and opposition! We are aware that different opinions exist – you only have to read the comments section on any online news article mentioning same-sex parents to see this, but sad as this is to see, the fact that these opinions seemed to only be aired behind the safety of a keyboard gives us hope that they are becoming increasingly rejected.

We do get friends and colleagues asking questions they probably wouldn’t ask heterosexual parents as bluntly, such as how our son was made, but we don’t mind these. After all, there was a time when we didn’t know the answers ourselves! The idea that babies have a mum and a dad is hard for people to change in their minds, and most questions tend to be curious fascination around the donor.

But for the most part, we are just like any other family. We both bathe, feed, dress, play with our son. We watch him explore, watch him grow into this beautiful little person full of love and laughter. We are both parents, different but equal. Families come in many shapes and forms, and there are many different stories of people’s journeys to parenthood. Our family might not be the traditional set-up, or even everyone’s idea of normal, but this beautiful world we live in definitely wouldn’t be as wonderful if everyone was the same. We never forget our journey to becoming a family, and how lucky we are to be able to call ourselves that.

Sarah Stanley-Evans lives in Birmingham with her wife Lauren and their 2-year-old son, Oskar. She loves travel, nature and writing.

This article was originally published in JUNO Late Summer 2018. 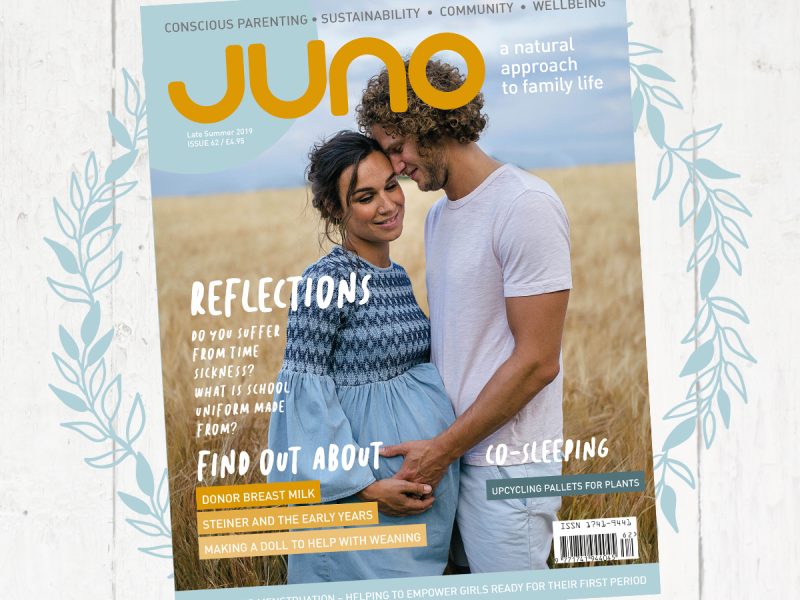